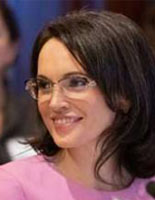 Olivia G. Fischer, a native Romanian, was raised under Ceausescu’s communist regime. She immigrated to the U.S. in 2002, became a citizen, and quickly rose to management positions at prominent national and private U.S. banks.
She has studied a variety of religio-political and economic systems, on both the experiential and abstract levels, using her knowledge of Romanian, Italian, Spanish, French, Turkish, Arabic, Russian and Greek languages—together with the history of the cultures of these respective countries—to understand global issues and views, especially those in the Middle East and Eastern Europe as they contrast with the West.

She collaborates with her husband at Planet Heritage, a Foundation established to support activities that mitigate the existential threats to civilization and the planet—including conflict prevention and resolution; curbing environmental injury and resource depletion, vis a vis conservation of soil, forests, water, oceans and climate; and dealing with other global security issues such as massive human migration and cyber security.